In a few corners of the world, people still live much the same lives they’ve lived for thousands of years. Their stories will blow your mind!

The Korowai people of Papua New Guinea build their incredible houses on stilts up to 100 feet high. Why do they build so high? Two reasons.

Firstly, to counter the threat of flood waters. Practical and understandable for people living in the tropics.

The second reason? To prevent women and children being captured for slavery and/or cannibalisation by rival clans.

Modern civilisation didn’t even know the Korowai existed until 1970. Since then, contact has been limited.

Perhaps it should stay that way…

Tree houses are cool. They can also save you from cannibals (!)

The Sentinelese people of North Sentinel Island, part of the Andaman and Nicobar Islands which is a group of 572 islands in the Bay of Bengal between Myanmar and Indonesia, are legendary.

We don’t really know their population (estimated between 40 and 500), or how long they’ve lived on this small Andaman island (as long as 60,000 years) but their thought to be direct descendants from the first humans in Africa.

The Sentinelese resent outside human contact. In fact, every known landing on the island has ended with visitors either running for their lives or being killed.

An Indian military helicopter dropped food after the Boxing Day Tsunami and was shat at by a lone male brandishing a bow and arrow.

In 1974 a would-be film director took an arrow in the thigh.

An escaped convict drifted there on a raft. His body was found with arrow puncture wounds and throat cut.

In 1981 a Hong Kong ship was ship wrecked there. The natives descended on the survivors before they sent a distress call and were air lifted out.

In 2006, two fisherman were killed when they strayed too close to the island.

These hostile hunter and gathers have rejected modern civilisation.

An unnamed, previously unknown Brazilian Tribe was found in the Amazon during a flyover recently. Deep in the Amazonian jungle this settlement had been spotted a few hours hours earlier. When the plane came back for another pass, this is what greeted it.

The men painted red hold large bows used to hunt for animals such as monkeys, deer, tapirs, wild boar and other small mammals.

The red body paint is urucum and is commonly used by tribes in the Amazon. It’s made from the seeds of a fruit, which are ground into a paste to form the dye.

The body paint is most likely a show of aggression, possibly in response to the plane’s first flyover. 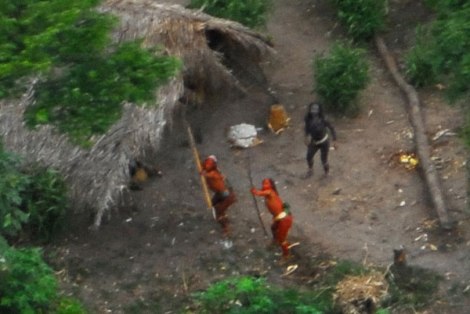 So, as much as technology and connectivity has transcended modern society, there’s still parts of the world that are practically untouched by modern man. Where people continue to live in much the same way that they have many thousands of years.

AdventureHoney exists to help you find cool things to do when you travel. Don’t know about you, but we think it’s pretty cool that some places in the world remain off limits to modern man and, tourism.

What do you think?

One response to “The Lost World: Not All Humans Are “Connected””